The Friday 56 is a weekly meme hosted by Freda’s Voice, and the rules are pretty simple: 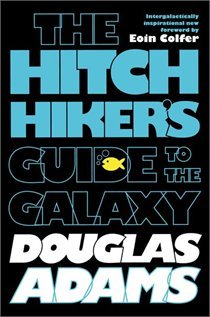 I recently realised that I haven’t quoted The Hitchhiker’s Guide to the Galaxy by Douglas Adams yet, which is just plain wrong. So, here it is. It’s a long one, but it explains the tone of book quite well:

‘The argument goes something like this: “I refuse to prove that I exist,” says God, “for proof denies faith, and without faith I am nothing.”

‘ “But,” says Man, “the Babel fish is a dead giveaway, isn’t it? It could not have evolved by chance. It proves you exist, and so therefore, by your own arguments, you don’t. QED.”

‘ “Oh dear,” says God, “I hadn’t thought of that,” and promptly vanishes into a puff of logic.

‘ “Oh, that was easy,” says Man, and for an encore goes on to prove that black is white and gets himself killed on the next zebra crossing.’

I’m not going to ask you to guess what it’s about from that because that sort of has everything and nothing to do with it, and the plot is way too random to be just guessed. Instead I’m just going to ask this: what do you think?

Also if you have a Friday 56 post of your own leave the link in the comments so I can check it out.