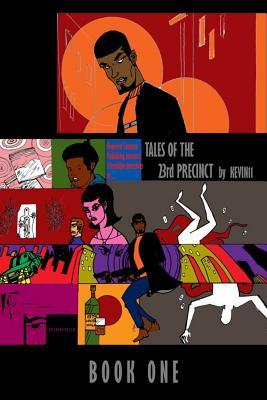 Tales of the 23rd Precinct by Kevin 11

Format and Source: Paperback, Sent by author in exchange for an honest review

It is well documented that despicable acts in the form of murder, bank heists, snitching, and drug trafficking happen in the heart of New York City daily. However, no borough is more adept to the turmoil of the inner city streets than Brooklyn. In a unique presentation, readers will be able to follow the stories and individual background surrounding Detectives Deborah Lane, Luke Fisher & Frank Matthews. The three detectives must use their wit, competence, persistence and sly capabilities to maneuver throughout Brooklyn and wherever crime may take them. No matter what misguided notions they act upon or crossfires they may encounter, it is quite odd and compelling that each of their stories correlate into something frankly twisted. This project compares to the substantial work of great writers in the Detective Fiction genre such as Ed McBain & Clark Howard. Once the book is devoured in its form, readers will hope for a time portal hoping to transport them back to where it all began

Tales of the 23rd Precinct by Kevin Eleven was a quick and interesting read. I did have a few issues with it, which I think is where I’ll start.

This book was split into three separate parts, each focusing around a different character and case within the precinct. This was a good idea, and, while I did enjoy the characters portrayal, it was too short. It was face paced in the bad way, where there was too little suspense. This combined with the many punctuation errors made reading it a tad less enjoyable. What was well-written were the action scenes, which were detailed and were one of the few suspense filled parts.

My favourite character portrayal out of the three characters was that of Frank Matthews. While the other two characters were obvious ‘good guys’, he was more villainous and added a ‘Dexter-esque’ quality to the book. He was an interesting character, and it was easy to tell the author enjoyed writing his part more as I feel like there was a higher attention to detail in this part of the book, particularly to portrayal of Frank Matthews attitude and idiosyncrasies. Well, I think the author enjoyed it more, but that might just have been paying attention to the section more.

Another aspect of the book I enjoyed was the actual cases themselves. They were all interesting – even though I still believe they were too fast paced to have any suspense. The cases helped defined what sort of personality each character has too, especially Detective Deborah Lane, who was probably my second favourite character in the book. She almost added an element of contrast to the book, as the first story in the book focused on her, and she is fundamentally good character and is very dedicated to her work. Frank Matthews’ story ended the book, and he was pretty much the opposite. It’s small things like this that I really like.

Overall this certainly wasn’t a bad read, and, while it does have faults, the well-written characters overshadow this issues. I will definitely be reading the sequel.

One thought on “Book Review: Tales of the 23rd Precinct by Kevin 11”