So far in June I have acquired some of books, most of which were sent to me (I love free books). But since I’ve gotten so many I decided that a good old book haul is required.

The first three books I’m going to mention I actually bought when I got bored one day and decided that I was in need of a trip to Waterstones. So the books I got were…

Eleanor and Park by Rainbow Rowell

‘Eleanor is the new girl in town, and she’s never felt more alone. All mismatched clothes, mad red hair and chaotic home life, she couldn’t stick out more if she tried.

Then she takes the seat on the bus next to Park. Quiet, careful and – in Eleanor’s eyes – impossibly cool, Park’s worked out that flying under the radar is the best way to get by.

Slowly, steadily, through late-night conversations and an ever-growing stack of mix tapes, Eleanor and Park fall in love. They fall in love the way you do the first time, when you’re 16, and you have nothing and everything to lose.

Set over the course of one school year in 1986, Eleanor & Park is funny, sad, shocking and true – an exquisite nostalgia trip for anyone who has never forgotten their first love.’

I have been meaning to get this for ages, and now I finally do! I won’t be left out anymore!

More Than This by Patrick Ness

‘Seth drowns, desperate and alone. But then he wakes. Naked, thirsty, starving. But alive. And where is he? The street seems familiar, but everything is abandoned, overgrown, covered in dust. Heremembers dying, his skull bashed against the rocks. Has he woken up in his own personal hell? Is there more to this life, or perhaps this afterlife? From the acclaimed author of the Chaos Walking trilogy and A Monster Calls comes one of the most provocative teen novels of our time.’

I might be meeting Patrick Ness in July so I decided I need to read some of his book. Also it was recommended to me on my recommendations page, so I thought that this was a good place to start.

‘Sephy is a Cross – a member of the dark-skinned ruling class. Callum is a nought – a ‘colourless’ member of the underclass who were once slaves to the Crosses. The two have been friends since early childhood. But that’s as far as it can go. Until the first steps are taken towards more social equality and a limited number of Noughts are allowed into Cross schools… Against a background of prejudice and distrust, intensely highlighted by violent terrorist activity by Noughts, a romance builds between Sephy and Callum – a romance that is to lead both of them into terrible danger…’

This is by another author I might be meeting at YALC in July, and also I have wanted to read this book for ages, so I thought this was a good place to start when it comes to read her books.

Now the rest of these books have been sent to me by three authors. The first of which is…

The Habitué by Douglas White

‘For young Ben Boarman, it started off as a typical Halloween with his sister, Bailey. That is until they met a woman who gave him a strange warning, “Don’t forget to check the well!” Sure enough, later that evening, Ben received a cryptic message and an interesting new ability near the well in his backyard. From there, Ben and two of his friends, Dan and Althea are drawn into a mysterious battle in the small town of Linford between two powerful groups, the Keepers and the Habitué. The Keepers have called upon Ben to help them but the Habitué have someone as well, Darell Novitski. Darell is smart, strong and utterly devoted to the Habitué. Ben and his friends are intent on preventing the Habitué from succeeding in their plans for Linford but with Darell in their way they realize that time may not be on their side. The Habitué are everywhere. They are nowhere. They are the shadows. And they will not be stopped.’

This was sent to me in exchange for an honest review. This was independently published and I can’t wait to see what it’s like.

Schism, Collision, and Risen, the three books in The Battle for Darracia Trilogy by Michael Phillip Cash 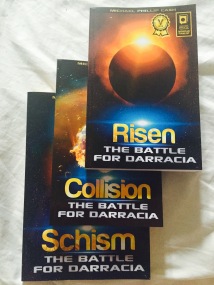 ‘On the planet Darracia, an ever-widening social gap between its inhabitants is causing turmoil that is fracturing a once peaceful world. Struggling with his identity, nineteen year old Prince V’sair must harness the power of the elusive Fireblade, the secret to a warrior’s heart, in order to overcome his uncle Staf Nuen’s lust for supremacy. Will the energy of the Elements guide the young prince to his true destiny or will Staf Nuen conquer Darracia?’

For some reason when I read the synopsis for these it reminded me of Ender’s Game by Orson Scott Card crossed with Cinder by Marissa Meyer. I’m not sure why though, but I definitely can’t wait to read them.

The Fairy Wren by Ashley Capes

‘When Paul Fischer receives a strange phone call asking for help, from a woman who might be his estranged wife Rachel, he’s drawn into a mysterious search that threatens not only his struggling bookstore, but long-buried dreams too… Unfortunately, the only help comes from a shady best friend, an Italian runaway and a strange blue fairy wren that seems to be trying to tell him something – yet the further he follows the clues it leaves the less sense the world seems to make. Is he on the verge of a magical, beautiful discovery or at the point of total disaster?’

This one I received in ebook form (hence why it wasn’t in the ‘group photo’), and the cover is so pretty I might just buy a paper copy simply for that.

Which of these looks the most interesting to you? I definitely can’t choose.