As you’ve probably heard me babble on about recently, I was lucky enough to attend a Sarah J. Maas talk and signing last Friday, where she answered questions and signed books, you know, the usual. Now I already knew she was awesome and hilarious from the interview Jesse the reader did with her on his YouTube channel, but now I actually have met her and watched her answer questions for an hour, I now know how amazing she really is.

Sarah J. Maas is one of those people who is not only bubbly and chatty, she is also really honest, from the fact she loves re-watching the more smutty scenes in Outlander, to her obsessive love of Lord of the Rings and Legolas – she was the founder of her high school’s Lord of the Rings club, and she still has a full-size Legolas cut out. She is a complete fangirl which makes me love her even more. 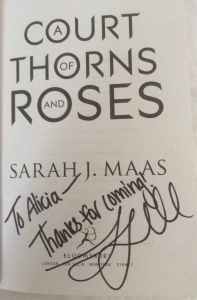 When it got to the signing I was actually slightly nervous meeting her, which I realise is ridiculous. She is just another person, who happens to write. I think it’s because authors are as strange and as foreign as the characters they write about because we only know them from the back pages of their books where they are described in few words, and maybe they thank people too. They are the creators of the worlds we immerse ourselves in, to the point we emotionally connect with the characters, so meeting this creator, who doesn’t even know of our existence, is awkward.

Meeting her was great though. In fact the entire time she was signing my book she was actually chatting to me about the fact that John Noble, who was in Lord of the Rings, happened to signing autographs not far away, and she didn’t know what to do or how to go up to him. She was basically quietly freaking out like I was earlier, and that put things into perspective so meeting her wasn’t as awkward from then on.

I also got a photo with her, where I look even more pale than usual (that’s a lie, I am so pale Edward Cullen is jealous). I don’t know whether I got it for your benefit or mine, but here it is…