This is me carrying on the series, mainly because I think it helps show what sort of things I am interested in. I don’t know if you like this, please tell me if you do. Also, if you think I should definitely read any of the books I list please comment below so I know where to start (because I’m sort of lost on where to start).

This is a charity shop buy, and is something I do intend to read – mainly because I like the movie Treasure Planet. I just don’t know when I’ll get round to it.

Following the demise of bloodthirsty buccaneer Captain Flint, young Jim Hawkins finds himself with the key to a fortune. For he has discovered a map that will lead him to the fabled Treasure Island. But a host of villains, wild beasts and deadly savages stand between him and the stash of gold. Not to mention the most infamous pirate ever to sail the high seas…

I bought this after seeing the movie, and I found the concept really interesting. Still haven’t got around to reading it though because I forgot about it.

High fashion, low cunning – and the boss from hell

When Andrea first sets foot in the plush Manhattan offices of Runway she knows nothing. She’s never heard of the world’s most fashionable magazine, or its feared and fawned-over editor, Miranda Priestly – her new boss.

A year later, she knows altogether too much:

That it’s a sacking offence to wear anything lower than a three-inch heel to work.

That you can charge cars, manicures, anything at all to the Runway account, but you must never, ever, leave your desk, or let Miranda’s coffee get cold.

And that at 3 a.m. on a Sunday, when your boyfriend’s dumping you because you’re always at work, if Miranda phones, you jump.

But this is Andrea’s big break – it’s going to be worth it in the end.

This I just got because it was on sale with The Devil Wears Prada and it was cheap… I don’t have a book buying problem at all.

Three best friends. Two resolutions. One year to pull it off.

Emmy has just split with her boyfriend of five years. A serial monogamist, she suddenly realises how much she’s missed the thrill of single life. A new job travelling across the globe could offer her the one thing she is craving, so she vows to find a man on every continent for some pure no-strings-attached fun.

Adriana is stunning and can have any man she desires. Yet all she wants is an eligible bachelor who’ll slip a five-carat Harry Winston diamond on her finger.

Leigh has a doting boyfriend that most girls would kill for. But when literary bad boy Jesse Chapman asks to work with her and more, she just can’t refuse.

The three friends make a pact – come hell or high water, they must change one thing in their lives by the end of the year… 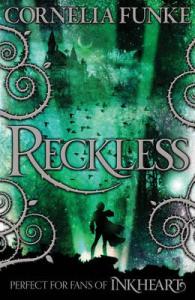 This was a buy because I did like the look of it, but I put it on my shelf and have just forgotten about it. I do believe that this is the first in a series of books, and I will probably read it soon.

Jacob Reckless has discovered a world on the other side of a mirror: a place of dangerous enchantment. There, he’s lived up to his name as a daring treasure-hunter, accompanied by Fox, a shape-shifting girl. But when his younger brother follows him, dark magic strikes. His brother will turn to stone unless Jacob can think of a way to save him.