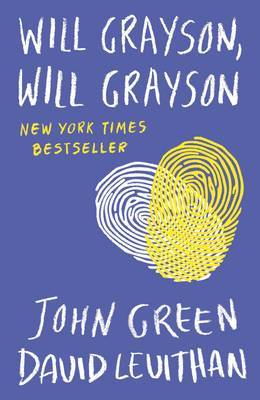 One cold night, in a most unlikely corner of Chicago, two strangers cross paths. Two teens with the same name, running in two very different circles, suddenly find their lives going in new and unexpected directions, culminating in heroic turns-of-heart and the most epic musical ever to grace the high-school stage.

When I read the Fault in Our Stars I loved it. Then I started reading all of John Green’s work and through that I found this beauty. Before this I had never read any of David Levithan’s work for some reason. Knowing me I probably just never got around to it. Anyway I read this book and loved it instantly.

The plot is based around two boys with the exact same name – Will Grayson – meeting, and that is the only thing that connects them (at first). They are both completely different and each one is written by a different author. The one John Green writes for is the sort of guy who tries his very best to keep under the radar, no matter what the cost. David Levithan’s Will Grayson is a boy with depression who does not care about life or other people, and is also gay. Later on in the book one other thing connects them: Tiny Cooper.

Tiny Cooper is an amazing character who is incredibly likeable and, in the beginning, is described as both ‘the world’s largest person who is really, really gay’ and ‘the world’s gayest person who is really, really large’. He is the sort of guy who is fine with his sexuality and is incredibly accepting of pretty much every type of person. Tiny Cooper is the person you wish you could be like (and no, I don’t mean incredibly large and gay). I mean the sort of person who accepts everyone’s imperfections, even your own, and ignores them because they aren’t what’s really important in life.

What I love about this book is everything. From the way it is cleverly written with the lack of capital letters when it is David Levithan’s Will (that is apparently because this Will views himself in all lowercase), to what each author brings to the table in terms of writing techniques. But, what probably is my favourite thing is that Will Grayson and Will Grayson aren’t actually what the book is about. It’s about what bonds them together, and at first that was just the fascination of them sharing the same name. But that changed to their love (both platonic and romantic) of Tiny Cooper.

This book has my highest recommendation as it is enthralling and funny and interesting and captivating and LGBT+ friendly and makes you consider things you never really considered before. This is a definite must read.