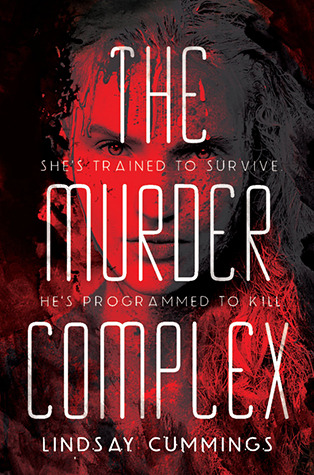 The Murder Complex by Lindsay Cummings

An action-packed, blood-soaked, futuristic debut thriller set in a world where the murder rate is higher than the birthrate. For fans of Moira Young’s Dust Lands series, La Femme Nikita, and the movie Hanna.

Meadow Woodson, a fifteen-year-old girl who has been trained by her father to fight, to kill, and to survive in any situation, lives with her family on a houseboat in Florida. The state is controlled by The Murder Complex, an organization that tracks the population with precision.

The plot starts to thicken when Meadow meets Zephyr James, who is—although he doesn’t know it—one of the MC’s programmed assassins. Is their meeting a coincidence? Destiny? Or part of a terrifying strategy? And will Zephyr keep Meadow from discovering the haunting truth about her family?

Action-packed, blood-soaked, and chilling, this is a dark and compelling debut novel by Lindsay Cummings.

I heard about this book from numerous popular vloggers who picked this book up recently and loved it. I was skeptical at first simply because it sounded like another typically dystopian book, but when I heard that the female character was stronger than the male I had to get it. That and there’s a lot of blood and gore and action, and I love that kind of stuff! When I finally received from Amazon after a weeks wait I did what everyone does and read the cover (which you’ve got to admit is pretty cool). I’m not one for quoting but just look at this…

If that isn’t compelling I don’t know what is! Maybe it’s the almost rhythmic way it was set, or the way it captures the humanity of someone who is trained for surreal situations where your life is on the line. I don’t know but as soon as I got that book I started reading it.

This is based in a place which is governed in a way where just surviving is hard and, when people die, no one really cares. To get a job which pays what they would consider decently you are tested to see how much you want it. Basically, you’re put in a room with another candidate and whoever comes out alive gets the job. The point of view switches every chapter between Meadow and Zephyr (you can tell they’re going to be romantically involved somehow, can’t you?). Meadow has been trained by both her father and her brother to survive anything and anyone, no matter what. And Zephyr, well, let’s just say that he has many issues of his own and they are all part of the grand scheme of things.

What I like about this book is that the characters are completely different, and the writing style is almost changed to capture both of their personalities. Meadow is the colder out of the two, more analytical. This was reflected in the style as things were more stated with little romanticised. Think Andy McNab style where it sounds more like a report. On the other hand the language used to portray Zephyr’s mind was much more emotive.

What might be the only thing I am unsure about is the ending. By unsure I mean I don’t really know what happened. Reading the end was like falling asleep for ten minutes when watching a movie and waking up to see one character dead and the other going off with the dead guy’s sister (maybe I did fall asleep whilst reading this). I’m probably going to have to re-read it sometime just to see if I can make sense of what happened.

Overall I do recommend this to those who are like me and prefer Kill Bill to the Notebook as it has plenty of action and blood to satisfy our more ‘unique’ tastes.